PATHA VINAYAGAR TEMPLE - HILL TEMPLE ENTRANCE : Come to entrance in the base of the hill and you can see a north facing temple. Here three Vinayagars are housed instead of one. They have to be worshipped before three acts. One is going round the hill, the second is going up the hills and having darshan of Dandayudapani, and the third is fulfillment of various vows undertaken by a devotee. For the above three Vinayagars came to be called Patha Vinayagars. Let us bow before all the three Vinayagars to have the grace of all.

VANA DURGA TEMPLE - GIRI VALAM : The Vinayagar at the right side of the entrance attracts larger number of devotees. In the Arda Mandapa, apposite to us one in Yoga pose bleese us and he is the Dandapani Swamy, graced by the potent Durga. Attired in yellow cloth, Durga stands majestically. An awesome face. That she is not aggressive is disclosed by the kumkum receptacle held in her left hand. The upraised right hand holds the trisula. Her sixteen arms wields a variety of arms and her legs on a lion's head. As she guards the forest-Vana -of Muruga, she is called Vana Durga.

BHOGAR SAMATHI (shrine) - HILL TEMPLE : Bhogar is a well known Siddhar who made the idol of Lord Muruga at the hill temple. His guru is Kalanginaathar believed to be a Chinese and his disciple is Pulippani siddhar (whose Samadhi is in Thirupattur near Trichy covered in my Blog). Bhogar is an expert in siddha medicine and it is said that as per the last wishes of his guru, Bhogar proceeded to China to spread the knowledge of siddha sciences. His journey is said to have been made with the aid of an aircraft; he demonstrated to the Chinese the details of the construction of the aircraft and later built for them a sea-going craft using a steam engine. The details of these and other experiments demonstrated by Bhogar in China are clearly documented in the Saptakanda.

THIRU AVINANKUDI TEMPLE - SANNATHI ROAD : The Temple is about 2000 years old. Nakkirar in his Thirumurugattrupadai has praised this Sthals as third Padai Veedu. The holy tree of this Sthala is Amlaka. Velavi Koman, a feudatory chief was the ruler in the Sangam period. The classical Ahananooru speaks very highly of him. Vakisa Kalanidhi K.V.Jagannadan has opined that Podini must have been changed in to Palani and how apt it is. 'Avi' is the general name of a clan, like Chera, Chola, etc. Becouse they ruled small territories, they were called Velirs; as they belonged to Vellala caste they were known as Velirs; becouse of their philanthropic nature they came to be called Velirs; as they aided the kings in battle they were known as Velirs; Muruga too is called Vel. And instead of calling their ruler merely as Velir, they called him as Nedu Vel Avi. This place was once a big city. Nakkirar in jhis Tirumurugattrupadai only in this Padaiveedu, describes in 18 lines about several sages who worshipped here and about them, their thoughts and feelings. Finally when he praises them as having bodies without illness. We understand the medicinal nature of this place and of the existence of Siddhars. he adds "Devars". Moolavars and others from heaven come here and bow.

PERIYA NAYAGI AMMAN TEMPEL - PALANI TOWN : Another important temple going by the name of town temple, dedicated to Mother Periya Nayaki Amman, the local name for Parvathimatha, the august goddess of that illustrious Son Muruga. The temple is quite big and build in the south Indian architectural pattern. There are many mini shrines for Saivate Gods, like Muthukumaraswamy, Nataraja, Vinayaka etc. The Mother's temple is on the southern side of the Murugan, and the Kailasanatha temple is on the northern side. Close observation reveals that it was originally built for Muruga, and later the Mother's sheine and Kailasanatha shrine were added. So the Murugan koil is buffered by the shrine of his parents. Furthermore the flog staff and Mayura, the mount of Muruga are in frount of Murugan shrine. Any way, this method of Murugan seated in the centre with parents to his right and left is called Somaskanda Moorthi.

PERU UDAYAR TEMPLE - KOTHAIMANGALAM, PALANI : Peru-Udayar (called Periya Avudayar Kovil) is by far the most important and deserves special mention. Located near the railway line on the banks of the shanmuga Nadi in sylvan setting, it is about four kilometres from the bus-stand reached by two stages, by buses going on the Old Dharapuram road for three kilometres and by walking one kilometre from the arch on that road. It is convenient to go by a taxi or auto rickshaw and alight at the doors of the temple. In the evening and in the pre-dawn period, sounds of birds are heard and if you have a tape-recorder, you cannot afford to miss recording these. The air here is unpolluted and good breeze can be had. The Devasthânam has put up a Kalyana Mandapam behind the temple. The temple is dedicated to Peru Udayar or Brihadeesvarar a name that became a legend in the days of the great Raja Raja Cholo. The deity here is a swayambhu linga (i.e. naturally formed lingam) and so, local belief is that it existed even before Bhogar. Only male gods are found in the temple. A majestic figure of Dakshinamûrti, a rare Rudran and other gracious images in stone, as also the 16 old inscriptions should be taken note of.

OTHER TEMPLES AROUND PALANI

ON THE PALANI HILL TEMPLE:

ON THE PALANI HILL STEPS:

ON THE SHANMUGA NADHI:

ON THE KODAIKANAL HILL: 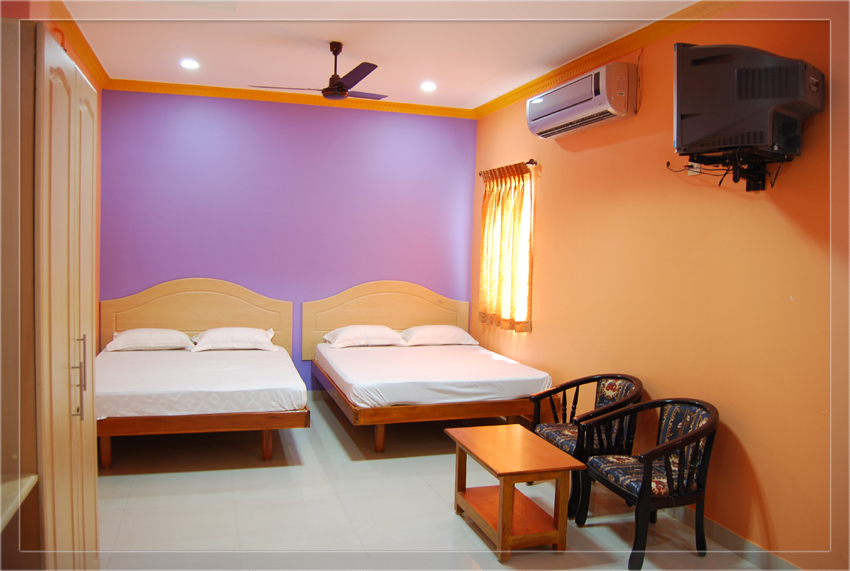 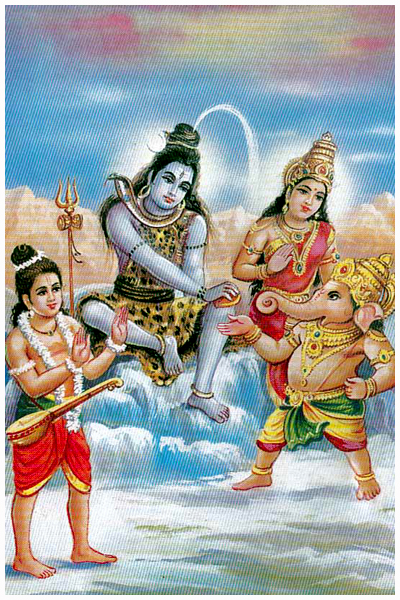 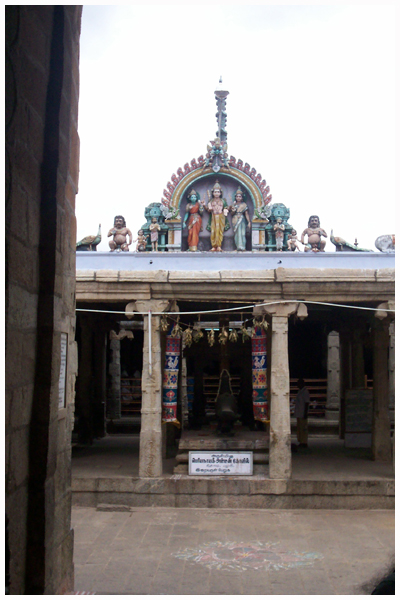 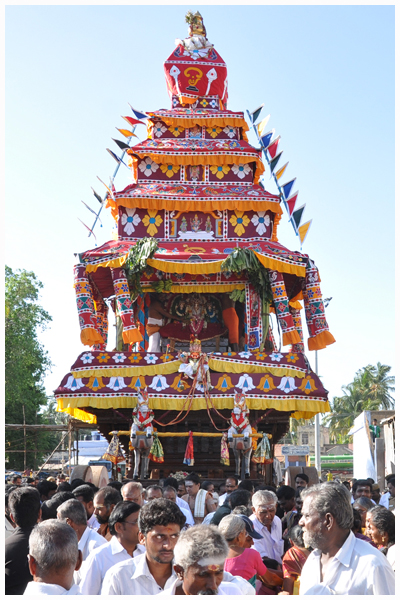 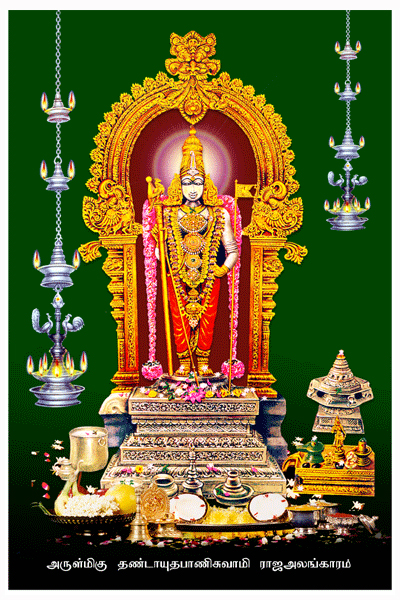 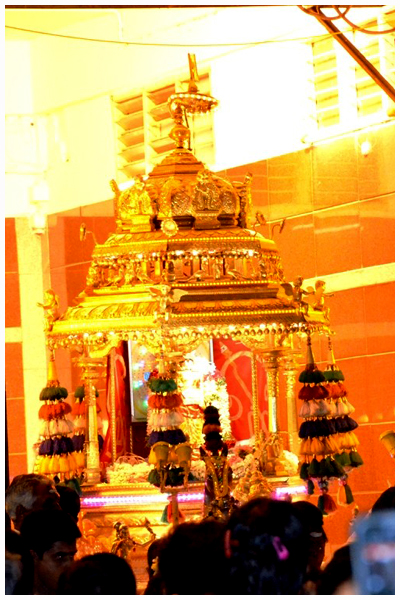